It’s widely understood that Western European welfare states are more generous (and expensive) than the United States. Government spending accounts for roughly half of gross domestic product in Europe—about 57 percent in France—while it adds up to only about 38 percent of GDP in the United States. Social spending accounts for about 18 percent of the total in the U.S., close to 32 percent in France, and about 26 percent in continental Europe overall. Taxes are also higher and more progressive in Europe than in America. (Great Britain falls somewhere in between.) These differences between Europe and the U.S. are not new, of course; since the beginning of the twentieth century, the U.S. and Europe have taken different trajectories when it comes to the welfare state.

We contend that the main reason for this difference is cultural. Americans, by and large, view the market economy as fair: if one works hard, poverty can be left behind; and wealth is generally deserved by those who have accumulated it. In other words, Americans believe in and endorse the American dream. Even after several decades of widening income inequality in the U.S., Americans don’t show much of a taste for greater redistribution, as shown in a study that one of us conducted in 2015, possibly because they don’t think that government can do it well and fairly.

Europeans, by contrast, believe that the poor will remain stuck in poverty, no matter how hard they try, and that many of the rich don’t deserve their wealth, which originated mostly from birth and connections in an “unfair” economy, based upon privileges. They believe that social mobility is low and that something like an American dream in their country is an illusion. Interestingly, Europe’s populist and isolationist parties are not averse to redistribution and welfare spending; in fact, they favor it, at least for natives. Donald Trump’s American supporters share the European populist opposition to expansive immigration and globalization but not the favorable views of the welfare state.

According to the World Value Survey, a respected international study of socioeconomic views, 70 percent of Americans believe that the poor can escape poverty if they try hard enough; only half of Europeans share this view. Even low-income U.S. respondents (especially whites) generally share these American views and don’t tend to favor redistribution, compared with the European poor.

A key difference in the responses of Europeans and Americans is shown in the bar graph that charts actual and perceived chances of economic mobility in the U.S. and the selected European countries. One bar plots the actual chance that a child born into the bottom quintile can move to the top as an adult, while the other displays the average answer of respondents in the various countries about the chances that such a child can do this. As the graph shows, European respondents are more pessimistic than Americans, though their statistical chances now look better. 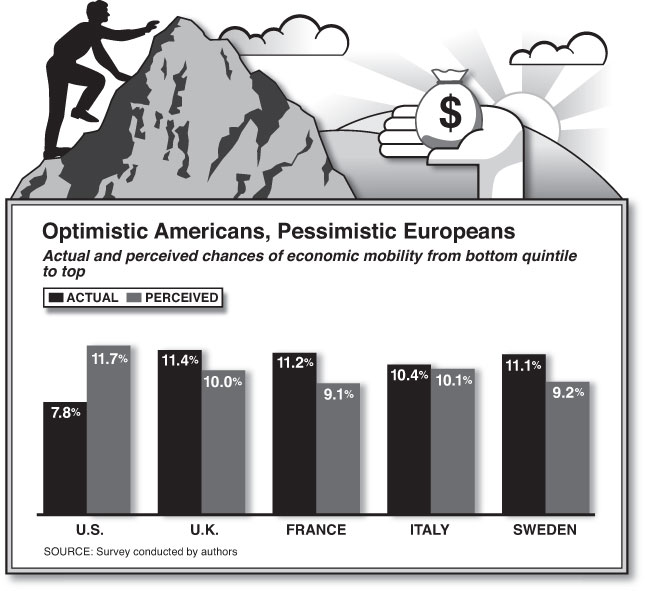 We then asked detailed questions about preferences for redistribution in terms of spending that would improve opportunities (say, on education or health) or achieve redistribution of income (food stamps, for example), and on the progressivity of the tax system. We uncovered strong correlations between the respondents’ views about social mobility and their preferences for redistribution. Individuals more pessimistic about social mobility favored government spending on programs designed to equalize opportunities and favored a progressive tax system. Interestingly, the respondents who believed that social mobility is low seem to favor equal-opportunity policies more than ex-post-redistribution of income.

American respondents showed a distinctive—and counterintuitive—geographical pattern. In areas such as the South and the Southeast, where upward mobility is relatively low, Americans were overly optimistic about prospects of upward mobility. The opposite was the case in areas where mobility is higher, as in the North and Northwest. This is an intriguing pattern that will require more study to understand.

Why do Americans and Europeans have these different views about wealth and poverty and the survival of the American dream? The answer lies in history.

Europe experienced hundreds of years of feudalism, in which wealth was associated solely with birth and nobility. Farmers had no hope of becom- ing landowners. Class divisions were clear and insurmountable. Even after the Industrial Revolution and all that followed, one still can trace family wealth in Europe back to the fifteenth century. In a fascinating recent study, Guglielmo Barone and Sauro Mocetti look at the distribution of wealth among families in Florence in the fifteenth century and today. They find an extraordinary persistence: if you live in Florence today and your ancestors were rich in the fifteenth century, you’re likely to be rich, too.

“Why do Americans and Europeans have these different views about wealth and poverty? The answer lies in history.”

The United States, by contrast, was forged by a wave of immigrants, starting with the Mayflower and then traveling on overcrowded ships, landing on Ellis Island. Many immigrants went on to become prosperous, of course, seizing American opportunity. There were no “classes” in the U.S., moreover, though racial and ethnic differences emerged as more waves of immigrants arrived. It is no surprise, then, that a sizable Communist or socialist party never developed in the U.S., as it did in Western Europe—even Marx and Engels recognized that they would have a hard time spreading their gospel in the United States. America lacked Europe’s centuries of class divisions, based upon income—the divisions at the core of socialist doctrine.

In Europe, ethnically homogenous working classes fought the homogenous upper classes. In the U.S., ethnic fragmentation caused divisions inside the working class. Working-class Irish, for instance, often saw working-class Italians as just as much an enemy as their (ethnically heterogeneous) bosses. Working-class Americans thus rejected class-based revolutions; in search of their fortunes, they moved to the wide-open West. Further, the European migrants had more individualistic attitudes, geared to shaping their own fate; those who stayed behind in the Old Country tended to have more communal, less individualistic, attitudes.

It is not clear why social mobility has declined in the United States. We doubt that a single answer exists. A recent wave of research in the new field of “cultural economics” shows that certain socioeconomic attitudes, beliefs, and behaviors that originated in certain states of the world—even in the distant past, and possibly in response to some historical event—persist for a long time, even after the world has changed. Thus, while the American dream seems less achievable than it was decades ago, cultural attitudes endure. In turn, Europeans remain influenced by hundreds of years of class privileges and the assumptions that grew out of them.

Is it better to be overly optimistic or overly pessimistic about social mobility? From the perspective of individual incentives, optimism is good. If parents teach their children that effort pays off (even more than reality demonstrates) and that anyone can make it, their children may put in more effort at school. Parents who teach pessimism to children may achieve the opposite result. Excessive optimism about social mobility could lead to social problems getting swept under the rug and to large pockets of self-perpetuating poverty. Conversely, excessive social pessimism may lead to high taxes, low incentives, stagnation—and migration of high-achieving innovators to the land of opportunity and the American dream, even if that dream is harder to attain than before.

Alberto Alesina, Francesco Giavazzi The virus will increase tensions between the thrifty North and the looser South; it may also offer an opportunity to take the EU to a higher level.
from the magazine